ACRE’s Policy Adviser, Jeremy Leggett blogs on emerging findings from a survey of community organisations who claim it is becoming even more difficult to manage their bank accounts as services move online.

For the last few months, ACRE Network members have been receiving cries for help from rural community organisations over banking services. The ‘presenting symptoms’ have been further closures of rural bank branches, sudden imposition of charges, difficulties changing signatories and problems resulting from trying to move to online banking.

It is often the case that rural areas experience the downside of economic and consumer trends before urban areas due to their smaller populations and reduced incentive for the market to offer choice. They can also be slower to receive the benefits of change for the same reason. Rural areas have recent experience of this in the commercially led roll-out of both broadband and mobile phone networks. However, in the case of access to banking services, rural community organisations have not been alone; many urban small charities are voicing similar concerns.

ACRE has been working with other national voluntary sector infrastructure organisations to identify the scale and scope of the problems and has recently collaborated with NCVO and others over a survey of the voluntary sector’s experiences. Initial findings from this will be published shortly, but we have been helping to analyse the rural impacts that have been reported. It is highly likely that the pandemic has both masked and accelerated changes, the extent of which we are only starting to understand.

The pandemic has accelerated a movement away from cash and provided a substantial push to convert more of the population to cashless transactions and online banking. Within the banking industry trading conditions have meant that all banks are seeking to reduce operating costs, increase the profits generated by their operations and streamline both their central and branch functions. At the same time Government has sought to strengthen regulation designed to tackle fraud and money laundering whilst the Competition and Markets Authority has sought to ease the market friction that limits people’s willingness to change banks or link them to other financial services.

It would not be an exaggeration to reflect that a perfect storm in the way small charities use banking services has been brewing for a year or so, and it is only the ending of the pandemic that has revealed its true extent. Their characteristics and requirements do not fit well with the business ‘drivers’ of today’s banking industry, as they:

No single bank will be keen to take these customers on as part of a ‘social responsibility’ unique selling point as this would place them at a competitive disadvantage to other banks who choose not to. Market theory might suggest a ‘challenger bank’ could take this on, but it would fail to overcome the access problems of a limited branch network for those charities that will still need this for some years yet to come.

Ultimately, all banking will be online, but the transition for small charities, especially in rural areas, is coming too fast, with too little thought and even less help to aid the transition.

The problem is substantial. The solutions, however, will need the active engagement of the UK banks, Government, the voluntary and community sector infrastructure organisations and the Charity Commission. We are committed to working with others to find these solutions.

Ultimately, all banking will be online, but the transition for small charities, especially in rural areas, is coming too fast, with too little thought and even less help to aid the transition 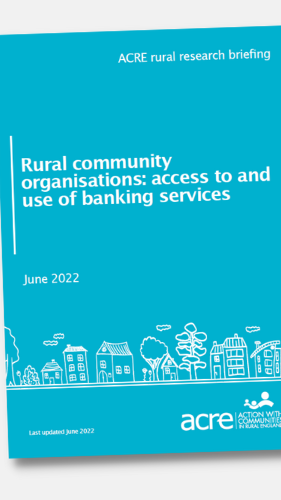