Briefing: Will ‘Levelling-Up’ genuinely reach out to rural areas?

Briefing: Will ‘Levelling-Up’ genuinely reach out to rural areas? 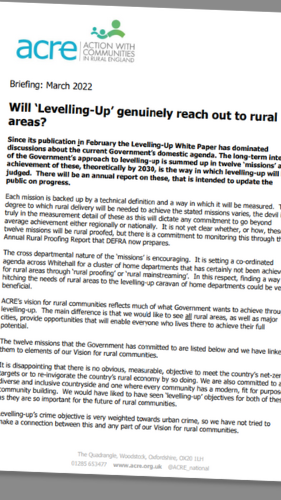 Since its publication in February the Levelling-Up White Paper has dominated discussions about the current Government’s domestic agenda. The long-term intent of the Government’s approach to levelling-up is summed up in twelve ‘missions’ and achievement of these, theoretically by 2030, is the way in which levelling-up will be judged.

The briefing reviews the twelve missions that the Government has proposed against ACRE’s own vision for rural communities.